Malta’s Eurovision hopeful Ira Losco just gave birth to a child, last night. Her partner Sean Gravina just announced this on facebook and revealed that the new born baby will be named Harry. He said that both Ira and the baby are in good health.
Prior to the last Eurovision Song Contest, Ira’s pregnancy was too much of a talking point in Malta. Rumours of Ira expecting a child have been circulating for months but Ira only officially broke out the news in Stockholm, on Mother’s Day.
Ira represented Malta twice in the contest. In 2002 she came second with 7th Wonder and this year with Walk On Water she qualified to the final by finishing third but only to end in twelfth position in the grand final.
The mother of a new born baby was until recently working on a new album and she is expected to keep on enjoying local success. 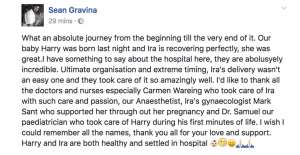 Ira’s partner Sean Gravina, a chef by profession, broke out the wonderful news.
Ira’s last performance on the Eurovision stage