Yesterday, on the 23rd of July, a statue of the late BBC broadcaster and legendary Eurovision commentator Sir Terry Wogan was unveiled in his hometown Limerick.

The mayor of Limrick unveiled the bronze sculpture at Harvey’s Quay, on the bank of the river Shannon. The statue is wonderfully made by Rory Breslin, a skillful artist. Mr Breslin had this to say about Terry: “He was a genial man, quick to smile, cheerful and warm. I hope this piece conveys that.” 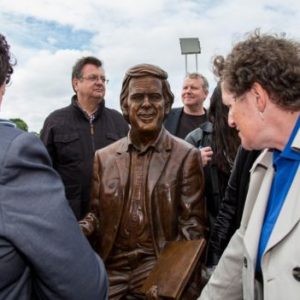 Here is more about what people had to say about him yesterday at the unveiling.

Sir Terry Wogan passed away on 31st of January, 2016, aged 77. The town wanted to honor his memory and work. He had a long and successful radio and television career.

Eurovision fans will remember his humorous take on the Eurovision Song Contest. He was the BBC’s commentator from 1971-2008 and it’s host in 1998 in Birmingham, UK. During his 35 years of presiding over the BBC commentary box he provided many many gems, Peter here at escXtra took a list of of our favorite Wogan Eurovision quotes.

One quote on the list is: “I never watch the Eurovision, I just do the commentary.”

We here at escXtra think it was about time that Sir Terry was honored in this way. What do you guys think?