Another month, another birthday! Actually; another FOUR birthdays! Yeah, that’s right! No less than four Eurostars celebrate their birthdays today! And we will of course send Xtra warm birthday greetings to them all! And for a change; let’s do them alphabetically by country today, instead of starting with the oldest!

Jüri represented Estonia in the 2016 Eurovision in Stockholm. He performed the entry “Play”, in the first semi. Even though he included magic in his performance, he did not make it to the final, finishing in a rather disappointing 18th place. Today he celebrates his 23rd birthday!

Hreimur Örn Heimisson represented Iceland in the 2011 Eurovision in Dusseldorf. He was part of the group Sjonni’s Friends, performing the song “Coming Home”. He is the one who sings the first part of the song. Their reaction to being called as the final qualifier from their semi is magical; their joy is massive, and I don’t think anyone can watch it without smiling! In the final they finished in 20th place.

Marlayne represented the Netherlands in the 1999 Eurovision in Jerusalem, with the song “One Good Reason”. She finished in a very respectable 8th place, which was the last time the Netherlands finished inside of the top 10 until Anouk in 2013. Marlayne was also the Dutch spokesperson in 2000, 2001 and 2003, and served on the Dutch jury in 2014.

Sebalter represented Switzerland in the 2014 Eurovision in Copenhagen. His entry, Hunter of stars, might be remembered mostly because of Sebalter’s very cheerful whistling. During his performance we also saw him play the fiddle. Sebalter finished 13th in the final; Switzerland’s best result since 2005.

All of us here at escXtra wish Jüri, Hreimur, Marlayne and Sebalter the very best of birthdays!! 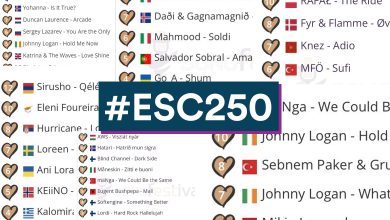