I am 22 years old, from Cambridge in the United Kingdom. I am currently working in admin, I joined ESCXTRA in June 2017. You can follow me on the following social media handles:

My earliest Eurovision memory is from 2007. I was just watching BBC then I heard something about Eurovision and I thought to myself (what is Eurovision?). The first Eurovision song I have ever heard is Flying the Flag (For You) when they promoted it when the Lotto Numbers were announced one Saturday night. I watched it and thought they gave a stellar performance (oh boy was I wrong)

It was a slow realization and process to get into the show. In the beginning I just supported the UK, especially in 2009 when the UK got its 2nd Top 5 result in the 00’s. I  did not even bother knowing about the other countries existence except whoever the winner was at that year.

But everything changed since 2012. When I heard Euphoria by Loreen I instantly fell in love with it and more with Sweden. That was then when I started looking more into the contest how it worked in more detail. 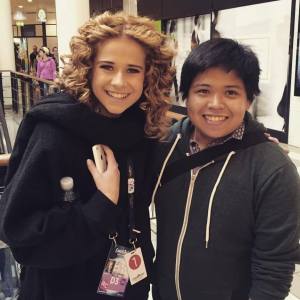 It is special to me because through Eurovision I am able to gain more knowledge about other cultures. Without Eurovision I wouldn’t have met so many people, whether  I meet them queueing up in the national selections or at the pre parties or in Twitter I never felt so included in a fandom.

I look forward to working with an awesome bunch of people and I cannot wait for the year ahead.

And finally, your top 5 Eurovision songs of all-time?

It’s 2013, it’s the first time I’m watching the Semi Finals and I have listened to the songs and looked at the running order and stuff. By this time I know that The Netherlands has not qualified for 8 years.

When it came down to the nail biting announcement I knew it had to be her like c’mon. Ever since Eurovision I listened to the album she released Sad Singalong Songs and fell in love with her music instantly.

I love this song, but I am very bitter about the result (like literally!!) I am one of the people who are still seeking #Justice4Greta. Greta had everything right with this performance, it was just a shame that it did not translate very well on to the Eurovision stage.

3. Lucie Jones – Never Give Up On You (United Kingdom)

You might think I’m biased for even having this in my Top 5. But this is the first time where I followed the journey of our entry in great detail. I am a very big fan of Lucie and the fact that she got kicked out of X factor (against FRIGGIN JEDWARD MAY I ADD!!) was horrible.

I love her work, so when she got announced I instantly knew she would win plus the song was co-written by Emmelie de Forest and she performed in the same spot! It might not have been the result the majority of fans wanted but I am very proud that this represented the UK.

You guys might think I am a very big fan of last year’s contest (well I am) this is no exception even the rumor that Dami Im might be the representative got me really excited!! Her performance of Sound of Silence was awesome and she nails it every single time, especially that high note near the end!!!

You must think that this is so cliché but if it wasn’t for Euphoria I wouldn’t even be here making my profile as we speak. It sparked my detailed fandom with Eurovision and fell in love Sweden in the process.

This entry will always be remembered regardless of whether you love or hate it.

Stay tuned for the next part in our Meet the ESCXTRA team series. On Sunday we will meet Aaron! Remember you can share your Eurovision stories with us in the comments section below or via the comments sections on our Facebook page @ESCXTRA. We would love to hear them!

TONIGHT: Eurovision Choir of the Year