France will likely be among the first countries to reveal their entry for Eurovision 2018. Destination Eurovision 2018 will take place in January, and France Télévisions is releasing new information everyday. Here is what we know so far.

The format of Destination Eurovision

A press conference on December 11th gave much information about how the national selection would unfold.
There will be two semi-finals, with 9 candidates each (thus 18 candidates in total), recorded before broadcast (on January 8th and 9th). The final will be live broadcast.
All three nights will be hosted by French Canadian singer (and The Voice judge) Garou. A French Jury (Amir, Cristophe Willem and Isabelle Boulay) and an International Jury (Christer Björkman from Sweden, Nicola Caligiore from Italy and Olga Salamakha from Belarus) will vote to qualify 4 candidates in each semi-final, leading to a final with 8 contestants.
During the final, live, the French Jury will only give its opinion, and won’t be voting. The International Jury will grow bigger, with members from 7 different delegations joining in (Armenia, Bulgaria, Finland, Iceland, Israel, Russia and Switzerland). The final decision will be shared by the 10-members International Jury and the French Televote.
A week ago, France Télévisions revealed the date of broadcast for the first semi-final : January 13th. Thanks to the duo Madame Monsieur and according to newspaper 20 Minutes, we now know that the second semi-final will be broadcast on January 20th, and the final on January 27th.

The fake news… or the leak?

In the last days of 2017, a picture with a list of 12 candidates appeared on social medias. Branded as “official”, the picture was actually an unofficial montage, and was quickly considered fake news. 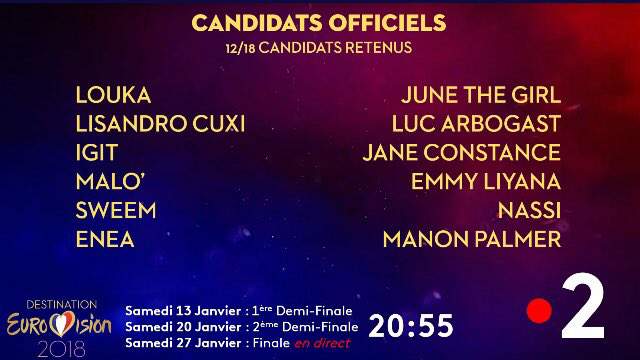 The picture is an amateur montage, yet the informations it bears seems to be genuine. Indeed, after the fake pictures appeared, France Télévisions started to release profile videos of the candidates on social medias. The videos introduce us to a candidate, who speaks about themselves, and with a short excerpt from their song at the end (in a style similar to The Voice’s intros). From what we knew at the time, the names of the candidates should only have been revealed in the days before broadcast.
Among the eighteen candidates, ten are in the list. And with the large national music industry in France, it cannot be a coincidence. If it was a guess, it was a very good one. If it was a leak, it was a partial one.

What do you think? Does this lineup look good to you? Will Destination Eurovision help France get back in the Top 10? Tell us on the comments below, or on social medias, at @escxtra !

Comments on Where are we now with Destination Eurovision? [Updated: Candidates and Dates]