Yesterday, the EBU revealed the pots for the 2017 Eurovision Song Contest semi-final allocation draw. The draw will take place at 1pm CET on 29th January. It will be hosted at the City Hall of Lisbon and broadcast live via YouTube, courtesy of Eurovision.tv. Sílvia Alberto and Filomena Cautela will host the event, who form half of the 2018 Eurovision Song Contest presenting team.

About the allocation draw…

It has already been decided that the first semi-final will contain 19 countries and that the second will contain 18 countries. This was decided by host broadcaster RTP together with the EBU and approved by the Eurovision Song Contest Reference Group.
As explained by Eurovision.tv and the EBU, the 37 semi-finalists have been divided into six pots “based on historical voting patterns as calculated by the contest’s official televoting partner Digame”. This is to reduce the chance of so-called neighbourly voting and “increase suspense in the semi-finals”. You can check out which country is in which pot by reading below. In addition, we briefly discuss the changes made since last year. 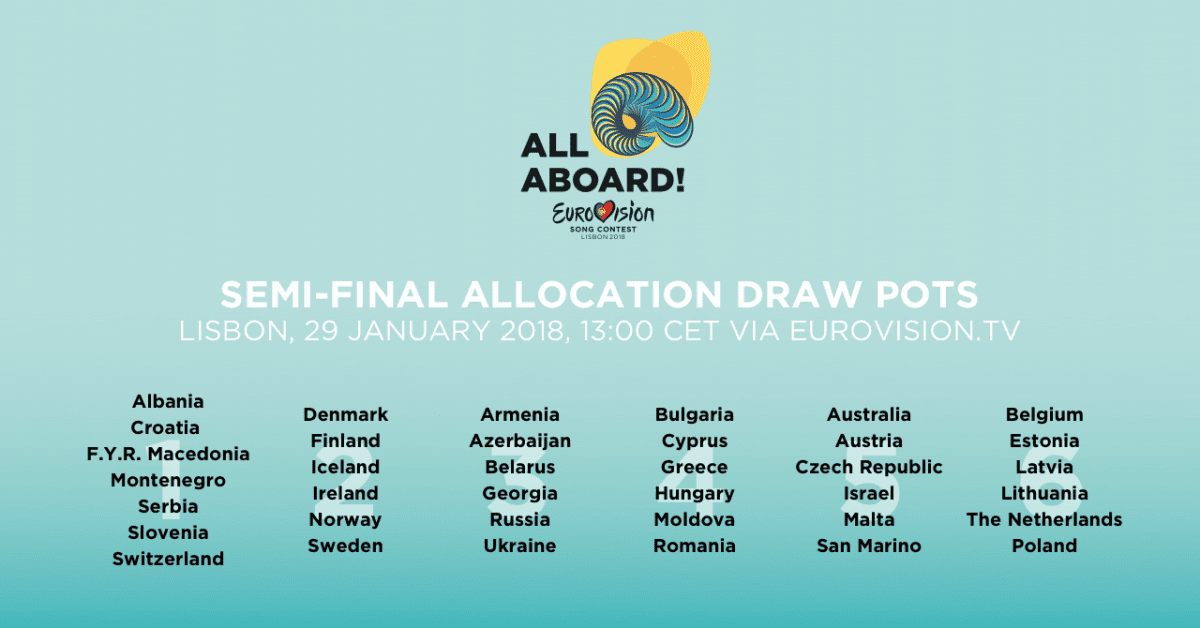 Pots 1 and 4 have remained identical to last year. Ireland and Estonia have swapped places between pots 2 and 6 respectively. Ukraine, who automatically qualified for the final last year, has taken Israel‘s place in pot 3. As a result, Israel has moved over to pot 5. Indeed, here there was an empty space due to Portugal receiving automatic finalist status as a result of their victory last year.
Compared to our analysis of the 2017 allocation pots, in which there were significant differences to the draw pots in 2016, this year’s draw pots are almost identical to those of last year. Indeed, 33 of the 37 semi-finalists this year are in the same pot as they were last year!

For our full analysis of last year’s pots, which also applies to a clear majority of this year’s pots, read our previous article here!

What do you think of this year’s allocation draw pots? Do you think there is any country who should be in a different pot? Furthermore, why do you think Ireland and Estonia have swapped places? Let us know in the comments below!