Tonight was the night when RÚV let us know all the Söngvakeppnin contestants 2018, battling it out to win the right to represent Iceland in this year’s Eurovision Song Contest in Lisbon in May. The singers and songwriters were all revealed during a live show on RÚV. Right after the show the songs were made public on the official Söngvakeppnin website.

Earlier on Friday, the list of the 2018 Söngvakeppnin contestants and songs was leaked. No one knows how this happened, nor where it was initially leaked. What seems most likely at the moment is that it was posted in a Russian forum, and then it just spread from there. Apparently the songs were also out for a very short while, on TIDAL. They were, however, taken down just moments after having been posted.

This is a terrible thing to have happened to RÚV, and they are now working hard to find out how this was possible. However, now the names have been officially announced, and we have taken a closer look at the artists and some of the songwriters, to let you get to know them a bit better.

Aron Hannes is the first of the familiar names on the list. He was one of last year’s Söngvakeppnin contestanst, when he made it to the final performing the song “Tonight”. Check out the interview we did with him last year, just before the final. One of the composers behind this entry is none other than Sveinn Rúnar Sigurðsson, who has had no less than 16 entries in Söngvakeppnin since 2003. Perhaps more importantly, he has written two Icelandic Eurovision entries; “Heaven” from 2004 and “Valentine Lost” from 2007.

Áttan is one of the most popular groups in Iceland at the moment. They have had a few massive hits in the past year, and are incredibly popular among the kids. We have seen several times in recent years that what I call “the kiddie vote” has decided the winner. In addition to the kids, however, Áttan are also a favorite among the teens. Among other things, they were chosen by Páll Óskar as the opening act of his huge concert in Laugardalshöll in December. Their most successful song is “NEINEI“. Singer Egill Ploder Ottósson was also part of F.U.N.K. who participated in 2013.

Ari is not yet very well known in Iceland, and is the youngest of this year’s Söngvakeppnin contestants. When he was younger he played in both Oliver Twist and The Wizard of Oz. He also took part in The Voice Iceland 2015. He has been accepted into the Royal Academy of Music in London, where he’ll be starting his studies this fall. The woman behind this song is a true Eurovision fan and Söngvakeppnin veteran; Þórunn Erna Clausen. She has written the lyrics to no less than 11 Söngvakeppnin entries; three of them in this year’s contest! She is however best known as the lyricist behind Iceland’s 2011 Eurovision entry, “Coming Home”. On most of her other entries she has written lyrics for other composers, whereas this one is entirely her own!

Fókus is a group consisting of four of the contestants in last year’s The Voice Ísland, and a guy who’s sort of already “won Eurovision”. The first of the The Voice participants is Karitas Harpa Daviðsdóttir, who won the competition. Sigurjón Örn Böðvarsson lost against Karitas Harpa in the final. Hrafnhildur Ýr Víglundsdóttir (the last to be voted off Team Svala) and Rósa Björg Ómarsdóttir (who lost the final duel against Karitas Harpa) both just didn’t make it into the final. The fifth member of the group is Eiríkur Þór Hafdal. During the Vienna Eurovision in 2015, he won the International Cover Contest at the Euro fan Café. He performed Euroband’s “This Is My Life”, alongside OGAE Iceland board member Flosi Jón Ófeigsson. He was also one of Aron Hannes’ backing singers last year.
The songwriters behind this song are an international team we know well; Jonas Gladnikoff, Michael James Down and Primoz Poglajen. They were also part of the team behind Birgitta Haukdal’s “Meðal Andanna” from 2013. This year’s entry they have written with two of the group’s members; Sigurjón and Rósa, and also the one and only Þórunn Erna. Sigurjón and Rósa also took part in Þórunn’s entry last year; they were backing singers and dancers in Aron Brink’s “Hypnotized”. At one point last February it seemed like some people might start a religion, solely for worshipping Sigurjón’s calves…

Dagur is a fairly new name on the Icelandic music scene, but his voice has already earned him a substantial following. He tried his luck in the British X factor back in 2012, and last year he received a lot of attention when he performed a wonderful version of one of Iceland’s best loved Christmas songs.
While Dagur Sigurðsson is an entirely new name to the Euroverse, the songwriters behind his his most certainly aren’t! They are none other than Júlí Heiðar Halldórsson and (again) Þórunn Erna Clausen (see above). Júlí has taken part twice before, both as songwriter and singer. The first time was in 2016, when he wrote, and played piano on, “Ready To Break Free”. Then again last year, when he both wrote and performed “Heim til þín/Get Back Home“. Check out what he told escXtra last year.

Stefanía Svavarsdóttir, Agnes Marinósdóttir & Regína Lilja Magnúsdóttir are a powerhouse girl trio, with voices that carry to the moon and back! We have heard two of them in Söngvakeppnin before. Stefanía took part in 2013 alongside Jógvan Hansen and in 2015 on her own. Take a look at what she told escXtra two years ago, ahead of her participation. Regína Lilja also participated in 2015, as part of Hinemoa. Agnes and Stefanía are also part of the songwriting team.

Þórunn Antonía has been a popular singer in Iceland for years, but up until now she has always said no when asked to do Söngvakeppnin. Almost every year, some songwriter or other has sent her a song or gotten in tough to ask her to sing their song. She always said, however, that she had to find a song she was passionate about, one she really believed in, before she would participate. And this year she found just that; she wrote it herself!

Guðmundur, better known as Gudi, is best known as a professional footballer. Presently he plays for IFK Norrköping in Sweden, but he has also played for Rosenborg Ballklub and Sarpsborg 08 in Norway and FC Nordskjælland in Denmark. He has also played for the Icelandic national team. The music has however always been an important part in his life, and when he signed for Rosenborg he flirted with the fans by doing his own version of one of the most popular supporter songs.
Gudi has two songs in the contest this year, but this is the one he’s also performing himself. He co-wrote both this song and the song “Brosa/With You” (see below) with Fannar Freyr Magnússon. 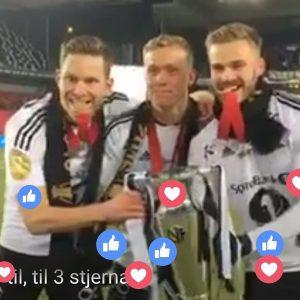 Here from his Rosenborg days, celebrating winning the Norwegian league with his fellow Icelandic teammates Mathias Vilhjálmsson and Hólmar Eyjolfsson.

Gyða is another The Voice Ísland participant. She made it all the way to the SuperBattle stage, where she lost out to Karítas (see Fókus Hópurinn above). She is performing this song with yet another The Voice contestant; Þórir. Just like Guða, he also made it to the SuperBattle stage, where he lost to Hrafnhildur (see Fókus Hópurinn above). Gyða and Þórir will perform the song “Brosa/With You” which is the second entry penned by Gudi and Fannar Freyr (see above).

Sólborg is yet another The Voice contestants now trying her luck in Söngvakeppnin. For her Blind audition she did a beautiful version of “When We Were Young“. Back in 2011 she was in the final of the children’s singing contest Jólastjarnan, which is a huge thing for young aspiring singers in Iceland. She didn’t win, however, because the winner was Aron Hannes (see above). Sólborg will perform “Ég og þú” with Tómas Helgi Wehmeier, who is…you guessed it; another The Voice participant! Like Gyða and Þórir (above) he also reached the SuperBattle stage of the contest. Sólborg and Tómas have written their own song, together with Brit Rob Price.

Rakel is a familiar face to all fans of Söngvakeppnin. This is her fourth participation, however it is her first time as a soloist. The first time we saw her on the Söngvakeppnin stage was back in 2014, when she did backing vocals for Greta Mjöll on “Eftir eitt lag”. The year after she, like Regína Lilja (above), competed as part of the group Hinemoa. And finally, she was back last year, when she performed the duet “Til mín/Again” alongside Arnar Jónsson. They were the big surprise qualifier last year…according to them! The rest of us were not at all surprised! See what they had to say to escXtra last year.

Heimilistónar is a group that’s been playing together for over 20 years. The band consists of four well-known and popular actresses. This is their first time in Söngvakeppnin. Their song is the only one in this year’s contest without an English version. So if the Icelanders want a song in Icelandic to represent them in Lisbon, they now know what to do! In addition to performing the song, Elva Ósk, Katla Margrét, Ólafía Hrönn and Vigdís have also written it together.

And there you have them; all the twelve semifinalists taking part in Söngvakeppnin 2018. What do you think of this year’s lineup? Have you found a song you really love, and which song do you think Iceland will send to Lisbon in May?

Comments on Söngvakeppnin 2018 – Get to know the participants!