Earlier tonight, Hungary kicked off their 2018 Eurovision selection ‘A Dal’ with the first ten artists and their songs.
After performances from all of the acts, the five jury qualifiers were announced as Leander Kills, Zsolt Sule, Viktor Kiraly, Ceasefire X & Gabi Knoll .. After the televoting concluded, the sixth and final qualifier of the night was announced as Tamas Vastag. 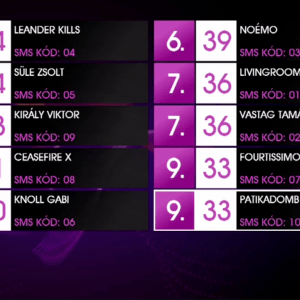 During the performances, the show’s official voting app experienced technical issues which resulted in the app vote being totally disregarded for this week’s show with only SMS votes being registered, as announced by host Freddie.
The six finalists have proceeded to the grand final which is scheduled to take place on Saturday 24th February.
The semi finals will continue next Saturday with a further ten acts taking to the stage.

Comments on The first qualifiers of ‘A Dal 2018’ are announced