In 2016, together with Sterre and Kymora, she represented the Netherlands at the Junior Eurovision Song Contest as the group “Kisses”. Now we are three years later and the Dutch / Greek teenage singer is working very hard on a musical career. On 29 Friday, November, she released her latest song and music video of “Turn Around.”

A few days ago, Stefania already posted a small teaser on her instagram page. In it she announced that new music would arrive on 28 November. The early birds were able to enjoy the song early in the morning. Later in the day, at 4 pm, the accompanying music video also came online on YouTube.

Should Stefania represent Greece in Eurovision 2020?

Stefania has already started her singing and acting career well in the Netherlands, but she has another country that is close to her heart. That is namely the country where she has her roots, Greece! It would not be the first time that Greece sends a candidate to Eurovision who was not born there. Just think of Helena Paparizou, born in Sweden, Kalomira took her first steps on earth in New Your. This year, Katerine Duska represented Greece while she spent her childhood in Canada. Stefania made her debut on Greek television this summer. She sang ‘Con Calma’ together with two other singers during MAD VMAs. Luca Hänni, Tamta and Eleni Foureira also performed during that show.

Do you think Stefania could be a suitable candidate to represent Greece or The Netherlands in Eurovision soon?

In 2016, AVROTROS elected Stefania internally as one of the members of the girl group Kisses. Together with Kymora and Sterre, she represented the Netherlands at the Junior Eurovision Song Contest of that year in Malta. There Kisses released the song “Kisses and Dancin” and finished eighth out of 17 participating countries. for example, the Netherlands achieved the top 10 at the children’s festival for the eighth time. Moreover, with their total score of 174 points, they achieved the second highest score ever for The Netherlands. 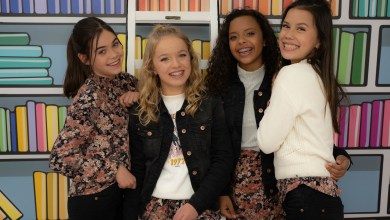