She’s a MelFest legend and has a penchant for a Masquerade, but Sarah seems to be ready for her biggest challenge yet! Representing the United Kingdom in their quest for a sixth Eurovision crown. Something the once legendary island nation hasn’t achieved in 24 years once 2021 rolls around.

After being spotted at a songwriters camp for MelFest 2021, she came to Twitter to clarify that she won’t perform at the national selection.

But that didn’t mean she wouldn’t ever rule out a Eurovision participation when she followed it up with the following.

Sarah has entered the national selection for Sweden, Melodifestivalen twice in 2007 and 2009. Both times have been ballads sung with her signature big voice and brilliant vocals. These have lead her to becoming a fan favourite in not just Sweden but in the wider European Eurovision bubble.

In 2007, she performed the song “I Remember Love”. She went direct to the finale where she placed in Fourth-Place.

Her second participation came two years later in 2009. Singing the song “Moving On”. She was in the same Semi-Final as eventual champion Malene Ernmann with theOpera-Schlager song “La Voix”. This time she had to advance to the Grand Finale through Andra Chansen. Winning her duel she became a double MelFest finallist where she placed Sixth the second time around. Sarah got the honour of representing Sweden as a spokesperson in Moscow, Russia giving the all important 12 points to Alexander Rybak’s “Fairytale” for Norway singing the song in the process.

SVT announced that Finer will host all six shows of MelFest 2019 alongside Eric Saade Marika Carlsson and Kodjo Akolor and performed a medley of Israel’s four winners.

While hosting MelFest 2012, Sarah became Lynda Woodruff. A made up fictional character who was an EBU supervisor. The character of Lynda happened to be a British person with a cockney London accent. Sarah is actually of British decent with her father coming from the UK. Lynda seemed to have a problem saying Azerbaijan (the host of Eurovision 2012 where Sweden won with “Euphoria). She presented the points for Sweden for a second time in Baku. On this occasion Sweden gave it’s 12 points to Cyprus’ entry “La La Love” sang by Ivi Adamou.

To announce that Malmö had won the bid to host the 2013 Eurovision Song Contest, Sarah reprised her alter ego. She erroneously announced that the capital Stockholm had won the bid and not Malmö. At the contest she continued her sketch and sung the ABBA hit “The Winner Takes It All”. In 2016 where the contest actually was being held in Stockholm, Sarah became Lynda once again having a Q and A session with made up questions.

As of August 2020, the broadcaster responsible for the British entry to Eurovision, BBC has not made any announcement of who will represent the UK in Rotterdam 2021. James Newman who was due to represent the United Kingdom in 2020 with the song “My Last Breath” has himself made no announcement as to whether he is or is not the British representative in 2021. The 2020 contest was of course cancelled in light of the Covid_19 pandemic.

Would you love to have Sarah Dawn Finer represent the UK? Tell us in the comments below or get in touch with us at @escxtra on all social media platforms. Make sure you subscribe to our YouTube channel and follow us on Spotify for curated playlists. 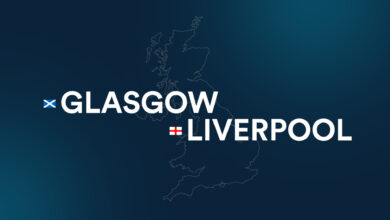