Preparations for Malta’s participation in the Eurovision Song Contest are in full swing. The filming for the video clip of the song Warrior, performed by Amber is underway. The national broadcaster revealed that the filming set is situated in an old house in Rabat (very close to Mdina, the old capital city of Malta).

The Maltese Eurovision hopeful, Amber stated to PBS that  the song remains the star of the show. She continued saying that Warrior is about dealing with the challenges we have to face in life and having the strength to overcome obstacles.

Meanwhile escXtra.com caught up with Amber and asked her about the fact that this year, another country (Georgia) will have the song with the same title as the Maltese entry.

Amber said to escXtra.com, “The way I see it, there’s not just 2 warriors, there are 40 warriors in this battle.” However the Maltese representative felt a little bit surprised. “I don’t think it has ever happened before but it’s not a big problem”, stated Amber.

The song Warrior is believed it are undergone some fine tuning and the Eurovision version is expected to come out soon. 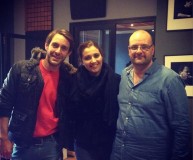 Amber flanked with the author (Matthew Mercieca – Muxu – left) and composer (Elton Zarb – right) after a recording session of the song Warrior.

Last November, Malta was one of the first nations to select it’s representative in Vienna. Amber won a convincing victory in the Maltese national final, taking maximum points.

You can follow all updates about Amber and the Maltese song Warrior by Liking this facebook page here!