What is Daniel Kajmakoski doing in hospital? Which 2012 participant thanks seat belts they’re still alive? Who just had a baby, and who’s next? One recent winner has a serious sweet tooth; who might that be? Find out the answers to these questions, and more, in this week’s “Have you heard that…”

…Iceland‘s Greta Salóme was in a serious car accident in Florida yesterday? The 2012 participant says she and her boyfriend are still alive only due to the fact thay were wearing seat belts. Greta had to spend ten hours in hospital in Orlando, but is convinced she wouldn‘t have survived the crash if she hadn‘t worn her seat belt. The car was totalled, and the couple is lucky to have suffered fairly mild injuries.

…Daniel Kajmakoski has donated a respiratory machine worth 17,700 eur to the Intensive Care unit at the Children‘s Hospital in Skopje? Daniel and his team at Eurovision decided that they wanted to spend the promotional budget on this instead of on promo meterial at Eurovision. No printed or hard copy promo material was handed out from the Macedonian delegation in Vienna. And now Skopje‘s children in need of intensive care benefits from this. As doctor Aspazija Sofijanova, the general manager of the unit, put it; „It turned out that Daniel not only has a beautiful voice, but also has a beautiful soul.“

…Cascada‘s Natalie not only celebrated her birthday on 23 September (Belated Happy birthday, Natalie!); she also gave birth to daughter Jamie the same week? She says on facebook that she is enjoying this special time very much, but goes on to assure the fans that she has not retired and will be back on stage later this year.

…Natalie isn‘t the only Eurovision star to become a mom these days? The Netherlands‘ Trijntje was actually already pregnant as she performed her „Walk Along“ on the Eurovision stage in Vienna. Now she is sharing her joy with her fans, by posting beautiful pregnancy pictures on social media. Congratulations, Trintje!

…there is apparently a very good reason why the reigning Eurovision champion is such a sweet guy? Måns is still touring Europe, and yesterday he posted a picture from Paris on his facebook page. And it was not one of those typical tourist shots; no Eiffel tower or Notre Dame in sight. Instead, *this* happened! Yummy!

…Alex Larke is going it alone, after the failed attempt at crowfunding the Electro Velvet debut EP? He has now started a PledgeMusic campaign for his solo project. Let‘s keep our fingers crossed we‘ll see a better outcome for this project than for the previous one. Good luck, Alex!

…Ann Sophie has better things to do than feel gloomy about her Eurovision result? She is contributing some of her time to the work with welcoming the Syrian refugees. In September she helped unpacking and sorting donations in the Hamburg Messehalle. Well done, Ann Sophie!

…Maria Haukaas Mittet isholding on and staying strong in the „Battle of the Stars“ on NRK? This week the contestants had to sing opera, and even that challenge she handled like a dream! Can she go on to win this battle? We will keep an eye on the contest, and report on Maria‘s results in the coming weeks.

From two weeks ago, when the contestants performed a bigband hit.
…wedding season is far from over? At least not in the Euroverse! Last week it was Severina‘s turn to tie the knot. She finally married her fiancee Igor, in a beautiful ceremony in Bale, Croatia. The newlyweds apparently celebrated the exchanging of vows by jumping into the pool to take artistic and gorgeous pictures. And of course they immediately shared the pics with the world through social media. 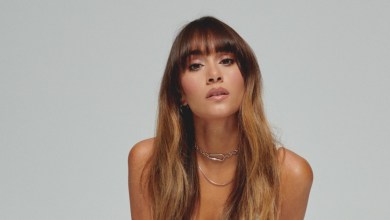