Madame Monsieur, the French duo that represented France back in 2018, have released their brand new single. The song is called “Terre inconnue” (which translates to “Unknown land”) and features French rapper Black M.

The song is taken from the duo’s upcoming album Tandem which finally has a release date: June 26! Furthermore, the album will have a massive amount of 25 songs.

Similarly to their new song and the previous releases by the duo, the album will feature a different French singer on each of their songs (as it is also shown on the new cover); the list includes Amir, Bilal Hassani, Jérémy Frérot, Kyo, Slimane, Christophe Willem and many more.

Are you excited to listen to the new album by Madame Monsieur? Which collaboration are you most looking forward to listen to? Be sure to stay updated by following @ESCXTRA on Twitter, @escxtra on Instagram and liking our Facebook page for the latest updates!

I'm Dimitris, from Cyprus. Eurovision has been a big part of my life for so long now. My first memories of the contest go back to 2005, which was a special year as Greece had won with Helena Paparizou. But 2009 was truly the first year I became a die-hard Eurofan, which is why that year holds a special place in my heart.
Leave a Reply

Comments on 🇫🇷 Madame Monsieur are in “unknown land” in new single 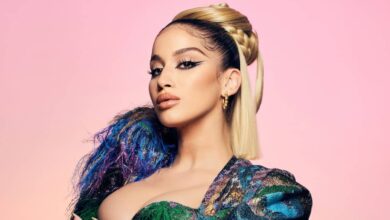