Earlier this month, we published a list of some of the potential artists being looked at by CyBC/RIK to possibly represent Cyprus at Eurovision next year. The list is part of the broadcaster’s plan to work with an established act for the 2021 contest. Now, yet another Greek star has expressed interest in potentially representing Cyprus.

Before we knew that ERT would be internally-selecting Stefania, Elena Tsagkrinou was among the names being rumoured for Greece. As reported by Eurovision Fun, she expressed interested in Eurovision participation in a recent interview.

Eurovision is an institution I have been following for several years – it is amazing to see so many artists and so many different types of music in one big and spectacular celebration. If the right song is found, it would be a great pleasure and honor for me to take part in the competition.

When asked more specifically if she would represent Cyprus at the contest, she said the following:

It would be a great pleasure and honor for me to take part in the competition. Either with Greece or with Cyprus, I would give my best for the best result!

As previously mentioned, CyBC are pleased to see the uptake in interest from so many well known artists from the Greek music scene.

However, there has not been any negotiations with any one singer, and they are still open for proposals.

RIK has accepted proposals from both artists and composers and will not take hasty action but will proceed rationally in order to make the best possible choice.

As we’ve seen from Panik Records with Eleni Foureira and Minos EMI/Universal with Tamta, record label backing is an important component for the Cypriot representative at Eurovision. Notably, Elena is signed to the same label as Eleni Foureira (Panik Records).

The source also said exploratory discussions will commence in August, with the aim of publicly announcing the artist/act in November. Following that, the song, clip and stage concept will be developed.

Cyprus at the Eurovision Song Contest

Cyprus made their Eurovision Song Contest debut 37 years ago, back in 1981. The island nation has participated in every contest since, with the exception of 1988, 2001 and 2014. Prior to 2018, Cyprus’ best results had come in the form of three fifth place finishes. These came courtesy of Anna Vissi’s “Mono i agapi” in 1982, Hara & Andreas Constantinou’s “Mana mou” in 1997 and Lisa Andreas’ “Stronger Every Minute” in 2004.

While Cyprus secured seven top 11 finishes in the 1990s, the nation’s form dipped as the contest entered its semi-final era. Cyprus failed to qualify in six out of eight occasions between 2006 and 2013, withdrawing in 2014 for financial reasons.

In 2020, CyBC selected ‘Sandro’ to represent Cyprus at the Eurovision Song Contest, with the song “Running”. Sandro was set to perform 13th in the first semi-final of the 2020 contest, which was ultimately cancelled due to the COVID-19 pandemic.

Would you like to see Elena represent Cyprus? Who else would you like CyBC consider? Let us know! Be sure to stay updated by following @ESCXTRA on Twitter, @escxtra on Instagram and liking our Facebook page for the latest updates! Also, be sure to subscribe to our YouTube channel to see our reactions to the over the coming months. 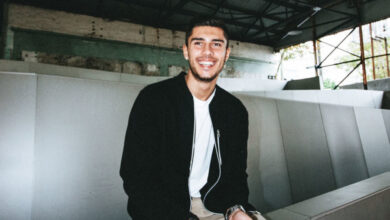