Former Polish 2018 representative Gromee returns this week with his latest collaboration ‘Broken’. The ‘Light Me Up‘ star has made a career of bringing his production skills on board for the up and coming artists of Eastern Europe, as well as household names, such as INNA and Edyta Górniak. This week he teams up with TikTok star and digital marketing expert, Olivia Addams from Romania. Together they deliver an EDM anthem of heartbreak and frustration.

Earlier this week, ERR revealed the first batch of artists for Eesti Laul 2022. With that in mind, we decided to check out the latest single from one of Estonia’s biggest Eurovision stars, Koit Toome. The 1998 and 2017 representative returns this week with ‘Vast tuult’ or ‘Against The Wind’. Against Koit’s usual nature, this uplifting anthem is also the soundtrack to Koit’s first film role in Christmas Rom-Com Hunting Season.

For the first time in my life, I agreed to make a movie. The first single, ‘Against the Wind’ will arrive on November 19, which is also the soundtrack of the movie “Hunting Season”!

Recently Yle announced more details for UMK22. So of course, we had to include a Finnish entry in New Music Friday to celebrate.. Today we drink to former UMK21 participants the Teflon Brothers who have joined forces with Spekti and Petri Nygård on ‘Munatoti’ or ‘Eggnog’. Every year since 2017 the fivesome have released fun, novelty Christmas tracks to get everyone – including Mariah Carey and Michael Bublé, in the festive spirit!

Munatoti is already our fourth and at the same time the best Christmas song made and released together. Around 2030, a joint Christmas album will be released, which will be Finland’s most beautiful, best-selling, streamed and best Christmas album ever. At least Mariah Carey and Michael Bublé have promised to visit the album, which has been praised by critics . After that, we head to Europe for a pre-sold out church concert tour.

Which is your favourite song of New Music Friday? Let us know! Be sure to stay updated by following @ESCXTRA on Twitter, @escxtra on Instagram and liking our Facebook page for the latest updates! Also, be sure to follow us on Spotify for the latest music from your favourite Eurovision acts. As well as YouTube to see our reactions to the news in the run up to the 2022 contest in Turin! 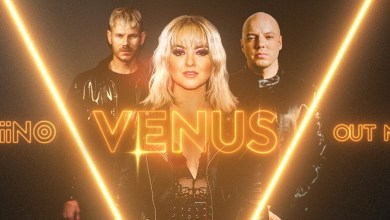