Lithuanian Radio and Television broadcast the first heat of Pabandom iš naujo 2022 tonight. A total of eleven artists performed their songs and after jury and televoters results were revealed, six of them heard they are going through to the semi-final.

The Lithuanian national selection will last for six weeks. We will see three heats, two semifinals and a final. The Grand Final will be held on 12th of February. You can read more about the format of Pabandom iš naujo in our article here:

Below you can find the artists competing tonight, with the qualifiers in bold. They were as follows:

The full results were as follows. Interestingly, the jury and the public vehemently disagreed tonight. Urtė Šilagalytė scored an absolute landslide in the televoting, but came near last with the juries. The opposite goes for jury co-winner Augustė Vedrickaitė. All in all, it came down to a compromise between jury and public. There, Erica Jennings tops the list, co-winning the jury vote and coming fifth with televoters. Have a look at the results below:

Although not automatically re-selected for 2021, The Roop were granted an invitation to the final from the Lithuanian broadcaster. With ‘Discoteque’, they almost doubled their total votes from 2020 with a landslide 68,000 lead on second-place Gebrasy and received top scores from the whole jury.

Have you watched Pabandom iš Naujo!? Let us know! Stay up to date by following @ESCXTRA on Twitter, @escxtra on Instagram and liking our Facebook page for the latest updates! As well as subscribing to our YouTube channel. Where you can watch our reactions to the news in the upcoming months. You can also follow our Spotify for more music from your favourite acts! 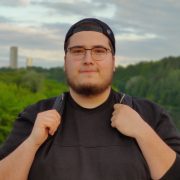 Hi! My name is Justas, I'm from Vilnius, Lithuania and my biggest passion in the world is Eurovision. I love analyzing and reviewing this contest from every possible side: music, vocals, history, predictions, odds, statistics, politics, etc. and I am trying to invent a new profession for me and it will be called "A reviewer of Eurovision".
Leave a Reply