This spicy summer collab is a treat to the ears and eyes alike.

The temperature is rising and along with the heat comes our need for summer bops. Thankfully, Eurovision 2022 ‘s wrs (Romania) and Andromache (Cyrprus) have decided to team up and gift us their newest song ‘If you were alone ‘(sta matia sou). It ‘s easy to recognize the Greek influence has on the song, as we hear some traditional music elements as well as a chorus in Greek. The two of them sing about a passion and excitement they feel whenever they ‘re together. I think we can all guess what they ‘d want to do if they were alone..

wrs announced the happy news on the song ‘s release on Twitter this Friday.

‘if you were alone ‘ was written by wrs and Andromache themselves, along with songwriters Cezar Guna and Vasilis Koumentakos. It ‘s produced by Costel Dominteanu, who is also partly responsible for the music (along with wrs and Guna). And did you know wrs edited the music video as well? A man of many talents..

You can now stream ‘If you were alone ‘ on all platforms!

wrs and Andromache at Eurovision 2022

Both wrs and Andromache performed their entry during the Second Semi-Final on May 12th in Turin. While both songs were quite popular amongst fans, only wrs emerged to the Grand Final with his tastefully choreographed song ‘Llámame ‘. Here he made it to the 18th place scoring 63 points. Andromache looked like a dream while singing ‘Ela ‘, but ended at the 12th place in the Semi-Final with 63 points.

What do you think of wrs and Andromache ‘s summer collab? Let us know! Be sure to stay updated by following @ESCXTRA on Twitter, @escxtra on Instagram and liking our Facebook page for the latest updates! Also, be sure to follow us on Spotify for the latest music from your favourite Eurovision acts. 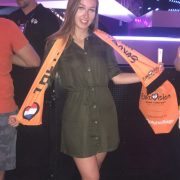