In the midst of ongoing conflict in Ukraine, Eurovision 2018 participant MELOVIN has released “не зволікай”. With this new single, he aims to lift the spirits of the people from the country.

While in Lviv, MELOVIN recorded a live video for the song, which translates to “Waste No Time” in English. During his stay in the region, he also volunteered to organise supplies for his countrymen.

Following the release, he has spoke out regarding the current situation in Ukraine:

On the night of February 23-24, I did not sleep. I opened a gift from my fans: a big Lego grand piano, which I built all night. I heard the first explosion at 1:53am and wrote about it in my team’s chat. My friends reassured me that everything was okay, and no one paid attention to it.

“At 5:57am a second explosion occurred, causing the windows to shake. I heard a series of loud explosions and a loud whistle. When I called the team, everyone said they heard it. When we looked on the Internet, we saw official information from our government, warning that the war had begun.

In the morning we started to pack quickly. I took my cat with me, and by 8am we had left for Lviv. What we saw on the street was almost unbelievable. People were in a panic, thousands of cars, many kilometres of traffic jams, queues to refuel the car.

Upon showcasing his new single on Instagram, MELOVIN provided an English translation for part of the lyrics to the song, which read:

Keep your back straight
When they’re shooting painfully
Those who don’t stand with us
And they think they know everything
Waste no time, it’s time to fly
But for truth, for freedom, they can’t break our wings 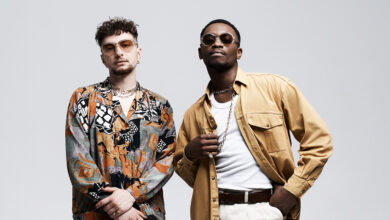