After the cancellation of Eurovision Song Contest 2020, Slovenia’s broadcaster RTVSLO left fans worried for a few weeks about Ana Soklič’s participation for the next year. Thankfully, she was confirmed to represent Slovenia on May 16th!

This means Slovenia will take a break from its annual national selection for both an artist and song, instead songwriters were encouraged to submit only their songs, to be sung by Ana. RTVSLO stated that they are searching for a song, but have yet to announce whether the winner will be chosen internally or through a national final.

RTVSLO made an Instagram post on 2 October proudly announcing the number of songs they had received: 191! According to the Instagram post, this is a record number of entries for the broadcaster, which means fans can definitely look forward to an interesting selection for Slovenia in 2021.

Slovenia in the Eurovision Song Contest

Slovenia made its debut on the Eurovision stage as an independent nation in 1993, after winning Kvalifikacija za Millstreet and getting the right to compete. They qualified along with Bosnia and Herzegovina and Croatia, who finished second and third respectively

The artist to represent the country for the first time was 1X Band, who sang “Tih deževen dan”. They finished in 22nd with nine points.

Since then, Slovenia has competed 24 times overall as an independent nation. Previously, they have competed as Yugoslavia alongside: Serbia, Montenegro, Croatia, Bosnia and Herzegovina and North Macedonia. As Yugoslavia, only four of the 27 entries were from Slovenia.

The country’s best results have been twice in seventh place. The first one was in 1995, thanks to Darja Švajger who sang “Prisluhni mi”. Meanwhile, the second of those came in 2001 with Nuša Derenda and “Energy”.

In 2020, Slovenia selected Ana Soklič as their representative with the song ‘Voda’. She will return for the 2021 contest. 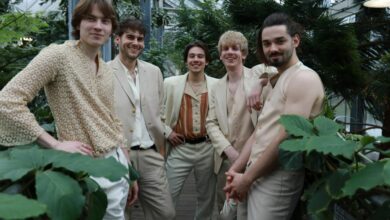 LIVE DAY 5 REVIEW: LPS from Slovenia are taking us to the disco in Turin