Nearly a year after he was announced as Switzerland’s representative for Eurovision 2021, Gjon’s Tears has released his entry for this year’s contest — “Tout l’univers”.

“We must stay strong”

Upon release of his entry, Gjon’s Tears said to Eurovision.tv that:

I am so happy that I will finally be able to take part in Eurovision this year and that I can spread a positive message with my song Tout l’univers. It was important for us to keep hope in this particularly difficult time: we must not give up and we must stay strong. With love, friendship, strength and courage, we can rebuild our future. I am convinced that in this exceptional situation it is possible to rediscover and reinvent ourselves.

The song was written by Gjon himself along with Wouter Hardy, Nina Sampermans and Xavier Michel. This will be the second time in a row that Switzerland sends a song fully in French. Switzerland are set to perform in the second half of the second semi-final in Rotterdam on 20th May.

Hailing from the municipality of Broc in Switzerland, Gjon Muharremaj has been entertaining people with music from a very young age. His stage name, Gjon’s Tears, comes from a childhood memory when he moved his grandfather to tears with a performance of “Can’t Help Falling in Love”.

At the age of 12, he took part in the first season of Albanians Got Talent where he placed third in the final. That wouldn’t be Gjon’s last appearance in a talent show and a year later he reached the semi-final of Die grössten Schweizer Talente (the Swiss version of Got Talent).

In 2019, he then tried his luck at a talent show again entering France’s The Voice: La plus belle voix. Mentored by Mika, he made the semi-finals of the show where he performed covers of Mika’s “Relax, Take It Easy” and David Bowie’s “Life on Mars”.

His Eurovision journey so far

Last March, Swiss broadcaster SRF announced Gjon’s Tears as their representative for the 2020 contest in Rotterdam. At the same time, his entry “Répondez-moi” was released, which was Switzerland’s first French-language entry for 10 years.

Just a few weeks later, the 2020 contest was cancelled as a result of the pandemic. However, SRF quickly announced that Gjon would be back to represent Switzerland at the 2021 contest.

In May, Gjon spoke to us about his career so far, his short-lived experience in the Eurovision 2020 bubble and also his family roots in Albania. You can watch the full interview here.

Earlier this year,  it was revealed by Gjon’s Tears and the the Head of Delegation Reto Peritz how the song was selected. Thirteen songs were created at the songwriting camp, and these entries were then produced across the continent before being presented to a jury of 100 Swiss residents and 20 international experts, in both their live and studio versions.

What’s your opinions on Gjon’s Tears entry? Are you a fan of “Tout l’univers”? 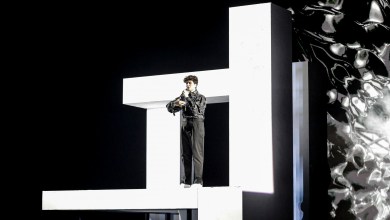