María Ólafsdóttir will represent Iceland at the 2015 Eurovision Song Contest in Vienna, Austria, after winning the annual Söngvakeppnin with “Unbroken”.
Maria and Friðrik Dór were voted into the superfinal, beating off the other five acts in the competition. She was then announced as the winner of Söngvakeppnin 2015. Iceland competes in the second semi final in Vienna on 21 May.
Unbroken is a contemporary radio-friendly pop song, written by Ásgeir Orri Ásgeirsson, Pálmi Ragnar Ásgeirsson and Sæþór Kristjánsson who are collectively better known as StopWaitGo. You can listen to it below:

Update 16/02: It was today announced by RÚV that María Ólafs received 70,774 votes in the superfinal compared to 55,850 for runner-up Friðrik Dor. Total votes on the night were a record 168,762. That’s one for every two people in the country.
Update 18/02: RÚV have released the full breakdown of results from the final which you can see below. Note that the jury had eventual winner, María Ólafs in 4th place of the seven contenders, so she only made the superfinal by a narrow margin. The public vote was very close between María and Frikki in the first round but María took a clear lead once the other songs were eliminated. 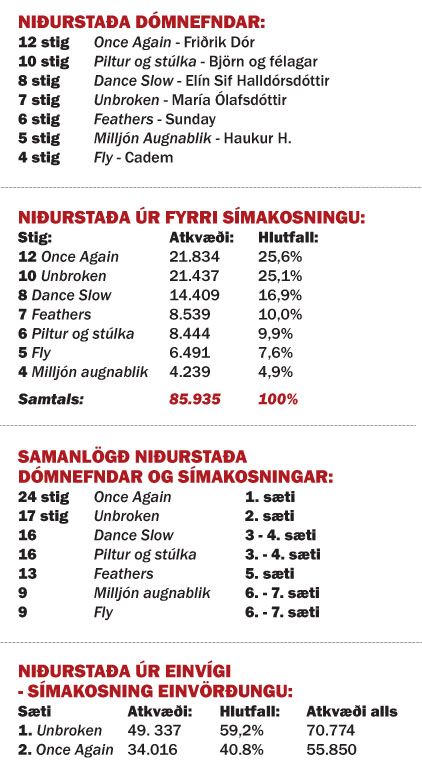