Just earlier this week, it was announced that Australia would be competing in Junior Eurovision 2015, and already they have announced a singer and a song.

13 year-old Bella Paige will represent the country at their debut in the Junior Eurovision Song Contest, with her song ‘My Girls’. Some may already be familiar with Bella, as she competed and was runner-up in The Voice Kids last year.

Another very exciting part to this story is that ‘My Girls’ is co-written by Bella with none other than Australian superstar Delta Goodrem. Delta has sold millions of records worldwide and has had many number one singles and albums in Australia and beyond. She is also a coach on The Voice Kids, where she met Bella. The two of them have written the song with Grammy-nominated songwriter Mitch Allan (whose credits include ‘Heartbeat Song’ by Kelly Clarkson, ‘Want To Want Me’ by Jason Derulo and many more) and producer Vince Pazzinga (a frequent collaborator with Delta Goodrem).

Bella was thrilled to get the chance to represent her country:

I couldn’t believe it when I found out I was selected to represent Australia and I’m so excited to be singing my single, My Girls, on a global stage in Bulgaria.

Meanwhile, Delta Goodrem had this to say about the young singer:

I’m so proud to be able to share this special song with Bella for Junior Eurovision. Bella has a phenomenal voice and so much confidence on stage, and I know she is absolutely going to wow Europe with her performance.

The song has been given its debut, and you can listen below. Australia will be one of 17 competing countries at Junior Eurovision in Sofia – do you think Bella can match, or even better the success of her adult counterpart Guy Sebastian earlier this year? We’ll find out on Saturday 21 November. 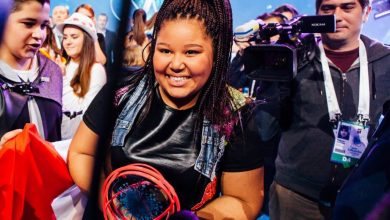